Skip to main content
My Blog On Life, Work, and Hobbies.

Whether to be Customer Driven or Customer Centric?

Whether to be Customer Driven or Customer Centric? 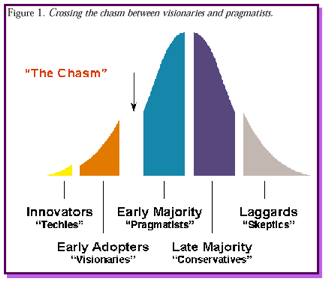 As seen in the picture above, when you read ‘Crossing the Chasm’, you will understand the importance of ‘Early Adopters’ i.e. the idealists, who have the insight to match an emerging technology to a strategic opportunity and willingly take high risks to pursue that goal, for a startup. But at the same time the book makes it very clear how important it is to think about the ‘Early Majority’ i.e. the pragmatists, who care about lot of things such as company they are buying from, the quality of the product they are buying, the infrastructure of supporting products and system interfaces, and the reliability of the service they are going to get, in order to succeed in the long term. Although, it is well understood and widely accepted that the ‘chasm’ between Early Adopters & Early Majority is killer for startups it is the next chasm between ‘Early Majority’ & ‘Late Majority’ i.e. the conservatives, which kills many established organizations.

The reason I say that is because many established organizations (which have evolved from being Startups) forget that the requirements of their existing Customers (i.e. Early Majority) are different from their prospective Customers (i.e. Late Majority). More often than not they let their existing customers dictate what they build as products instead of trying to understand what their new customers need for their company to move from Early Majority to Later Majority customers. Such decisions are taken by organizations for variety of reasons such as

The point is that whatever the reasons may be, some organizations forget to bring in both the ‘existing’ & ‘prospective’ customer at the CENTER before evolving their product strategy. Such organizations are generally DRIVEN by one/two MAJOR customers and their products reflect the usage philosophy of the solutions desired by ‘power’ customers. There is no doubt that with some extra efforts such products can still be sold to other customers BUT these products will never become the BEST OF BREED as they have been ‘engineered’ to solve specific problems of FEW customers. On the contrary, the other types of organizations, who do not let their ‘power’ customers drive their products, and focus on the whole market (existing & prospective) rather than few customers, generally (I say generally because even after taking such steps you can see products becoming disasters for different reasons), tend to succeed at creating BEST of BREED products.

The question is should an organization be Customer Driven or Customer Centric? In my opinion the answer depends on where in the curve you are & what type of organization DNA you have. If you are a startup, who needs early adopters then sure you must be customer driven because you probably have one or two major customers and you don’t meet their requirements you are probably going to be out of business sooner than later.

But when you are an established organization and if you don’t drive your products then somebody else will – as explained earlier most likely your most demanding customer, which may not be the right thing for your other REMAINING customers. Therefore, although it good to have big & demanding customer, who can act as an elephant, which will carry you through the chasm it wouldn’t be prudent to ride on its back for too long as it may take you places where you (& hence your product) shouldn’t go. Therefore, for an established organization it’s always better to be customer centric (focusing on majority of your customers) than being customer driven (by major customer(s)).

What are your thoughts?