Skip to main content
My Blog On Life, Work, and Hobbies.

How do I know whether my idea is worth to be built into a product?

The short and straightforward answer is no one knows. I don’t believe anyone can ever be 100% sure on whether their idea is worth built into product/offering because either by the time you become 100% sure you will see businesses around the same idea (very likely) or no one else has had the same genius as yours to figure out that market is un-served (less likely but happens). If you are an entrepreneur trying to serve a market, however niche or broad or unknown it may be, must trust your business sense. Of course you can do some validation of your potential market but don’t overdo it as history proves that most products/offering, which became extremely successful didn’t have much market validation effort going for them. For example, I don’t believe anybody told

Also, I don’t think one should take the feedback very seriously because following examples show that potential customers may not get the value of solution at first shot (like that helps J)

On the contrary it’s possible that you have a great idea but you don’t take action for some time and then you see that somebody else has built big business out of it. I guess Innocenzo Manzetti & Elisha Gray from 19th century would have agreed to this (had they been alive) after learning about what Alexander Graham Bell did with their innovation – Telephone [3].

Of course, if you decide or must do some market validation for your idea(s) then the following process diagram illustrates how one can reach GO/NO GO decision once the idea(s) is(are) evaluated

During various process phases you can use following techniques to perform activities required for that phase. As you can imagine the techniques depend heavily on the amount of information available for evaluation

If you have multiple ideas you are considering then when reasonably complete with the market research I recommend you draw a radar chart to see which potential idea you should take up. This same technique can be used by product managers to ascertain which feature should get implemented when they have competing features – albeit with different axis. 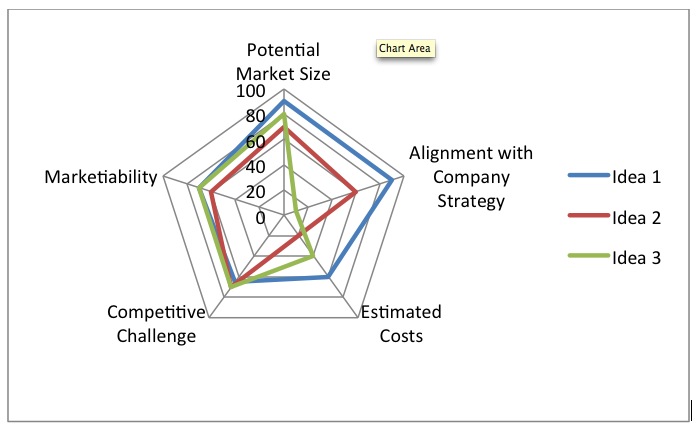 As you can see the radar chart provides a good view of how things stack up across multiple product ideas. Now, this is what I would do for screening the potential idea(s), what would you do?